A bride stands for photos on a footbridge over the Li River.

For those keeping score at home, I mentioned in this post that I had another photo prepared but the style contrasted too greatly. This was the photo excluded from the Oct. 27th post. As with most things in my life, my Photoshopping is a work in progress and I learn new things every day. My workflow begins by choosing similar themed photos. I discover certain styles are incompatible only after I apply my Photoshop voodoo. In this case, I realized that smoggy overcast photos like this one look far too gritty next to clear sunny photos like that of the crouching girl.

Other than that, I'm really liking the bride's green shoes! 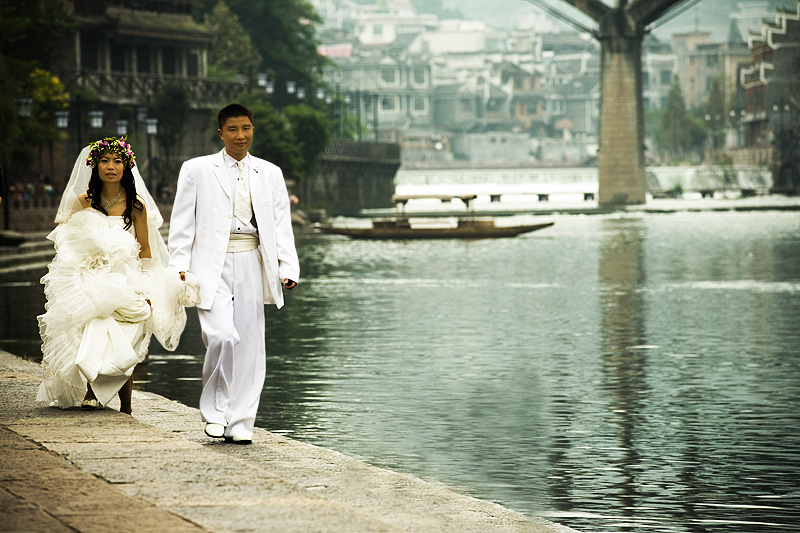 Bride and groom walk along the Li River.

Fenghuang is an understandably popular place to tie the knot. There aren't so many traditional villages in China that survived Mao's cultural revolution. Nearly every vista in Fenghuang includes a gorgeous traditional house or the river itself as a backdrop for a photo.

And speaking of sure things, I look at this couple and I think, yup, they're gonna make it. The groom seems resigned to his fate and no matter what kind of nonsense comes out of his demanding wife's mouth, he'll take the punishment without a fight. These are the made-up stories that lurk in my imagination particularly when I've traveled alone far too long without anyone to speak English to.