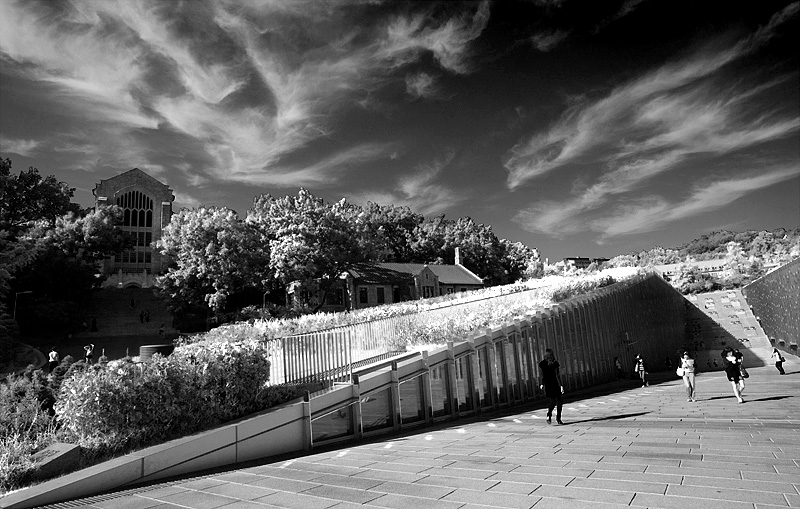 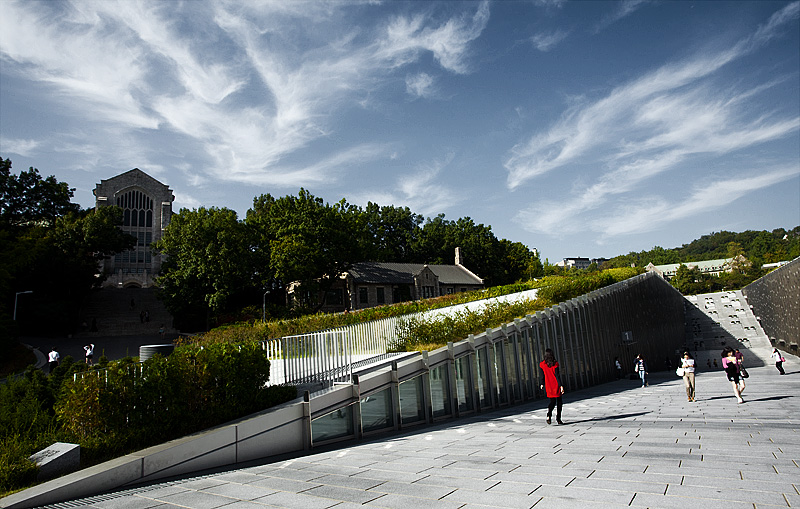 Lady in red on the campus of Ewha Womans University (ì´í™"ì--¬ìžëŒ€í•™êµ). I believe something got lost in the translation or you can attribute it to the lack of plural words in the Korean language however, don't blame me. I didn't misspell "Womans." Now back to the image: I couldn't decide between the faux infrared or color post-processed image. I'm leaning towards the faux infrared. Et tu, Brute? Comment area below if you wanna help me with your opinion.

In an overcrowded city, home to 1/4 of Korea's population, the option of University expansion is severely limited by the inability to destroy your neighbor's edifice. Instead of opting for the typical upward expansion, Ewha dug down: six massive floors of it. The incomprehensibly large divot on the right side of the image is the Ewha Campus Complex (ECC), or as I'd like to think, a more successful version of the "Big Dig". Students seem to do nothing but lounge in this underground lair or, like me, maybe they're all just taking advantage of the megawatts of blasted A/C.

The innards of the the ECC. If you're male and in the neighborhood, poke around this place, particularly if you need a toilet. Being a women's university, the men's bathrooms are unused to the point of neglect, yet kept spotless. Next time, I'm bringing some reading material so hopefully I'll finally finish that copy of Catch 22, I've read halfway (3 times).

For those keeping score at home, today's expedition features photos taken with a Canon 5D Mark II, the greatest thing to happen to me since the Canon 5D, followed closely by the acquired ability to eat solid food. The better part of last night was spent studying the user's manual which was about 90% the same as the 5D. The HD video section was entirely new to me. I wasted a good deal of my compact flash card today experimenting with the Mark II's video frivolity. Videos from today to come soon. Time to dust off the video editing software.