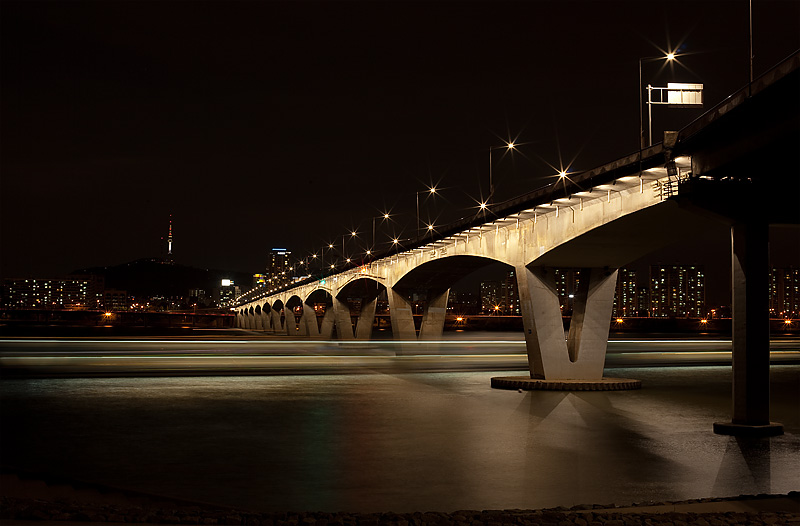 Often, I wander around Seoul, or any city for that matter, with no particular photographic goal or attraction in mind. Locals generally think I'm mad to walk for 5 or 6 hours a day when I can hail a taxi and not besmirch the high respect unduly granted to foreigners for no other reason than their being foreign. Some days I come home with terribly unusable photographs and calluses covering my feet. Other days, my compact flash card spilleth over and calluses cover my feet. On this particular day, I returned home with only three usable images that I rolled up into one multi-image composite.

I've blended three long exposures from under Won Hyo Bridge (ì›íš¨ëŒ€êµ) with N Seoul Tower (Nì„œìš¸ íƒ€ì›Œ) in the background. In each exposure, a boat leaves partial light trails as it approaches the bridge. Apparently this area is a hot spot for Korean amateur photographers. They all came, hastily snapped their long exposure shot of the bridge and tower then quickly departed for other pastures perhaps more full of cold beer and dried squid than cold river breeze and a sausage-fest of cameramen. No one remained around long enough to capture the scheduled 7:30pm dinner cruise boat.

In my experience, travel photographs often include a stage, however, photographers frequently don't wait for actors to appear on that stage. So whenever possible, wait for an actor to appear on stage. Often it adds an extra element to a photo that'll have any Korean yelling "ê¸°ë˜¥ì°¨ë‹¤!" (gee ddong cha da!, a positive compliment literally translated as "That kicks earwax!" ).

FYI, it was far easier to count those bridge lights in my high resolution file than on this 800px width file